Kulturhistorisk Museum in Oslo has entered a collaboration with Interspectral to visualize parts of the museum´s world-known collection of artifacts from the Viking Age. Together with Kulturhistorisk Museum, Interspectral has visualized the Langeid Sword, a unique Viking sword from the early 11th century. It´s estimated that approximately 3000 swords exist in Norway from the Viking age, but only a very small fraction has rich inlays and decorations on the handle – of which the Langeid sword is the one with the most elaborate decorations. Only the most affluent and powerful individuals in the Viking society could order a sword of this magnitude.

The story behind the Langeid sword

The Langeid Sword was produced in an era when Scandinavia was in a transition from the Norse faith to Christianity, why many of the symbols have Christian meaning and background. These symbols have engaged, and intrigued researchers since it was found in 2011.  In order to increase the knowledge about the sword and get additional information about the symbols, a CT-scan was performed in 2018. The CT-scan provided the researchers with valuable insights about metallurgical aspects, how the sword was constructed and helped interpret the symbols. Inside Explorer was a key component in the process of examining the data, facilitating the search for new insights about the unique Langeid Sword.

“In the process of planning for a new Viking Age museum in Oslo, we experiment and test different ways of communicating our collection. The visualizations of the Langeid Sword with the help of Inside Explorer have proven to be a successful way for us to explore the full potential of making 3D models of our objects accessible. It has been useful for both researchers to access high-quality 3D scanned data and for the public to explore and access the researchers’ knowledge of the Langeid Sword. This experiment has been so successful that it is now part of a permanent Viking exhibition at the History Museum in Oslo.”

The already existing Viking Ship museum is one of the most visited museums in Norway. The new Viking Age museum planned by Kulturhistorisk Museum will be three times the size and accommodate even more visitors. It will display the world-famous Viking ships as well as a unique Viking Age collection. The museum intends to bring the research findings and the 3D-model of the Langeid sword and other objects into the new exhibit environment, a plan made possible by Inside Explorer.

“Working with Kulturhistorisk in this project has been very valuable to us and Kulturhistoriskt museum is a precise example of how Inside Explorer is best used to visualize exquisite objects and deliver insights from times past”, says Louise Lennersten, CEO at Interspectral. “This is a perfect example of how we also can bridge the gap between history and education in new and engaging ways.” 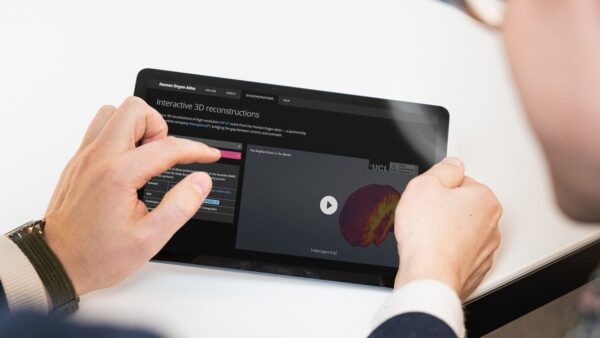